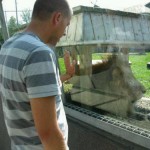 From the minute I stepped into the award-winning Planet Studios, I was met with a sense of warmth and hospitality, something producer, mixing engineer and studio manager Daniel Cinelli strives to do for anyone that walks in his door. “Sure you don’t want anything? Best coffee you’ll ever have at a studio!” one of the assistants asked me persuasively. I was a bit overwhelmed, as I admired the countless accolades—including a Juno—which covered the walls of the lobby.

The studio boasts of a comfortable, spacious and relaxed environment, with cozy and private lounge areas. Planet also offers a large variety of vintage and state of the art equipment and prides itself on its impressive roster of clients ranging from Win Butler, and Sam Roberts to Prince, and Rihanna. The studio also maintains its reputation as the choice of many top international and Canadian artists, producers and engineers. “I like to be one of the go to places,” Daniel says.

I had the opportunity to take a tour with Daniel of Planet Studios, a world-class recording, mixing and mastering facility located in the heart of Montreal. “We acquired the building in 2000,” Cinelli explained as we sat in the control room of the upstairs studio. “We built [the studios] over time so this was the first room we built.” Due to the increasing popularity Daniel had to open a second room three years later, followed by third in 2007 and mastering in 2011. “So there’s three studios in the building that are part of Planet, plus mastering and there’s eight other studios that are rented out to freelance producers and engineers” he added.

I realized that Montreal needed to step it up a little bit. So I took what I had gathered from studios in L.A. and I got close to a lot of the studio owners. I basically took the same notion that they had, the same attitude that they had.

Looking out onto the mixing console Daniel explained, “I had a studio prior to this one. My big plan was to take my gear and move to Los Angeles, because I was doing a lot of work in Los Angeles too. Then I realized that Montreal needed to step it up a little bit. So I took what I had gathered from studios in L.A. and I got close to a lot of the studio owners. I got into their heads a little bit about the business and things like that. I basically took the same notion that they had, the same attitude that they had. Though we’re not at the same scale as far as pricing and quantity of work there is, we can still offer the same type of attitude, same type of service and just scale it down a bit. So that’s what I set out to do and I think that sort of proved itself.

We also spoke about the secret behind Planet Studios’ success and Daniel’s thoughts on the impact that home studios have had on his business. “[Home studio work] sort of came in as an enemy,” Daniel said. “It took away a lot of business because a lot of our clients, and producers started to do work at home. At the beginning there was an impact, but people quickly realized that there are limitations, and I think they had to do a few records to figure that out. The flip side of it is that there’s a lot more music being created, so although we might not do as many records from beginning to end we really touch a lot of records in different ways.”

My little pride of owning a studio is the fact that you can put five or six [people in a room…] because I think that’s where the real magic happens—when people are playing music together.

Still, Daniel maintains his focus on why he started Planet in the first place, “The studio is about the service, about the staff. It’s about attention to detail, and making people comfortable. It’s a commercial studio but it’s got to feel like home. I’m sort of trying to keep the studio complex as a thing because there is less and less of it. I think musicians, myself included, appreciate having four or five guys in the room playing at the same time. Even musicians come here excited because it’s like ‘Wow, we’re going to play all together?!’ and every time I hear that statement I’m like ‘How else is it supposed to happen?’ So my little pride of owning a studio is the fact that you can put five or six [people in a room], that we could accommodate that because I think that’s where the real magic happens—when people are playing music together. That’s almost non-existent […] but I think there is this whole resurgence of bands now—the idea of a band. I think that’s coming back a lot with Arcade Fire and those types of bands. I find that the studio is starting to really become a studio again because we’re accommodating these bands.”

As we approached the end of our visit Daniel shed some light on the future of Planet Studios, “It’s definitely not an easy business but I think that if we keep our focus in the right place, which is service, making clients comfortable, being able to accommodate a big group of people, then I’d like to think that it’s going to continue. [Computer generated music] is a good chunk of our business but I think the fact of having all these rooms […] and having a good selection of amps, we sort of keep that rock and roll music studio thing alive—that’s what we’re trying to hold on to. The key is you have to adapt, you have to be current with everything. That’s our biggest battle.”

For more information on the Montreal’s Planet Studios, check out their website.