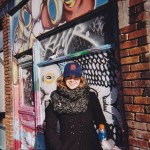 Mitz Takahashi is the man. A Japanese man, immersed in the expansive world of the arts. A self-made man with discipline and with drive. And ultimately, he is a man with imagination, who makes his friends smile and his coworkers laugh.

During the week, you can find Mitz sitting in a shared studio space, tucked within a Mile-End warehouse-turned-massive office building that’s best described as a large, unmarked ant farm for Montreal independents and artists alike. The smell of saw dust settles lightly between interspersed jokes that bounce between periods of focus and dedication. Next door is a small woodworking shop, complete with things like incomplete chairs, the machine that makes things flat, the machine that makes things square, a table saw. We borrowed a few stools and Mitz sat down across from me, clad in his paint-splattered shorts.

At 16, Mitz Takahashi of Osaka, Japan, found himself in the small town of Crowsnest Pass, Alberta, ready to complete a high school education far from his friends and family. The new environment brought the expectant waves of culture shock (which, besides the baby-puke-consistency of oatmeal, were particularly well absorbed by the young man), and all but unparalleled, quintessentially ’90s passion for indie rock.

While his family was a world away, their tenacity towards the arts would leave a lasting impact on a young Mitz, who went on to complete his Bachelor of Fine Arts at the University of Lethbridge. As an undeclared graduate, the BFA served as a tasting table for sculpting, sound engineering, theatre lighting, and graphic design. Now affectionately deemed his “Bachelor of Fuck All,” Mitz also developed an eye for modern and Japanese design — two styles now largely present in his own furniture.

After completing a course in furniture making at the Rosemont Technical Centre, Mitz focused on the discipline to—among other reasons—pay the bills. It fit nicely into the independent life he had carved out (pun intended) for himself and became another one of his creative outlets (Takahashi also writes for the mp3 blog Said the Gramophone and works as a DJ).

The furniture of Mitz Takahashi finds a fine balance between timeless designs and the combination of beautiful off-cuts. When asked what makes a quality design, Mitz responded with an interesting blend between two of his favourite things, humour and food, with perception.

“A good design is like a good joke. If a joke is too obvious, like a bad joke from a high school principal, it will fall flat. On the other hand, if it is too surreal, no one will understand. It must be somewhere in the middle.”

“Design is like food. There is something special about a simple meal of steak, medium-rare, with sea salt and pepper, some roasted potatoes and a few veggies. Some designers like steak foie gras, with chocolate sauce. It’s too much for me.”

“Design operates somewhere in the vagueness of the middle: a concept you can sort of see, and the rest you imagine.”

Takahashi’s collection combines his taste for timeless design and his quirky creativity. The staple pieces, like chairs, tables, and cabinets, are refined and modern, while he incorporates humour into pieces like “The One Night Stand,” and a clock that reads “It’s Time to Grow Up.” Made from mostly recycled and re-purposed wood, Mitz does his best to work within the means of sustainable ethics. As he concedes, “no one wants to build a table by destroying the rain forest” — at least not anymore.

A final and fundamental aspect to Mitz Takahashi’s design is the staying power in strong and finely-built furniture. Anyone on a bottom-of-the-barrel income can imagine the $10 Ikea table (appropriately called “LACK”) that’s easily replaceable after, let’s say, a party goes too far. On the other hand, Takahashi wants customers to consider furniture as an investment — a reliable piece of your daily landscape that stays stable while that landscape changes around it. Some of his favourite commissions find their homes in the apartment of young families, a hand-made table becoming part of their own, hopefully generation-spanning, collection.

In reference to his own apartment came the parable of the shoemaker who has no shoes — it’s sparse, with few of his own designs. Ultimately, Mitz works for others. He makes designs with a particularity to the wants and needs of a friend or customer—something that fits within their budget—even offering payment plans for a piece that may be out of their price range.

As a self-made man and artist, Mitz has reached a crossroads where it may be time to expand, perhaps by moving into a larger shop or hiring an employee in order to focus more closely on design. His future may also include a trip back to Japan, to study within a refined culture from which he takes much pride.

No matter his circumstance in the future, Mitz’s strong sense of self and off-the-wall humour will be sure to make light of the pressures of self-dependence. In the meantime, having the opportunity to work with, meet, or customize a piece of furniture from Mitz Takahashi is an experience all its own.

To view more of Mitz Takahashi’s designs, visit his website.