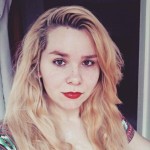 In a converted, two-story factory workshop, the Atelier Neon Family logo hangs high above a work table. Classical music from a boombox radio fills the room as morning sunshine beams in. The strange glow of neon seems almost eerie in the day but doesn’t suffer for beauty or artistry.

Company founder and family patriarch, Gérald Collard (“C.O.L.L.A.R.D., like collard greens, the soul food,” he explains) sits at his work table with his puppy, Toby, in his lap. Collard, who has piercing blue eyes and a passing resemblance to hockey legend Henri Richard, tells his neon story.

“I was born in 58’ and I love a New York-Vegas style neon,” he says. “I was fascinated by neon as a kid, seeing these big signs – the big cowboy, like in Vegas.” Then, he went to New York, where signs for Coca Cola and pizza caught his eye. “I thought: I can do that – but I won’t do pizza signs. I will revolutionize it!”

“Now every time I make a pizza sign, I think of that,” he laughs.

Neon remains foremost, a commercial medium. The Atelier Neon Family makes signs and logos for restaurants, tattoo parlours and other businesses. As we speak, another worker, Marcel, is assembling an elaborate dragon for Imago Tattoo on Saint-Laurent. A marvel of design and ingenuity, each colour represents a different part that needs to be connected carefully and seamlessly. More than just painting with light, there is a strong sculptural aspect to the work.

When Collard is not working in the shop, he is teaching. For twenty-five years he has taught at the Espace Verre glass school on Mill Street in Old Montreal, with classes on neon and glass blowing. While Atelier Neon Family is a family affair (Collard works with his daughter and sister), he counts his students as a part of a larger neon family.

The foundation of all neon light is gas (particularly neon and argon) which are manipulated into different colours by altering powders and interior coatings, creating a wider spectrum to work with. “Neon is 90% art and 10% making it light up,” he explains.

Working with glass is also a huge part of the work and largely why there is little fear that the craft will be dominated by automation. “Robots are very good at making circles and that’s about it,” Collard explains. Three different kinds of flames are used in manipulating the glass tubes into shapes: the ribbon flame (for curves), the crossfire (for angles), and the end flame (to connect different pieces and electric transformers).

The techniques for working and making neon lights has gone largely unchanged since it was invented by Frenchman Georges Claude, who first presented neon lights at a 1910 exposition in Paris. “Neon is an old craft and still very secret. The inventor Georges Claude had a patent for fifty years, so everyone had to work with him and people did not want to share how it was done,” Collard explains.

By the 1950s neon would boom in the United States and remains an aesthetic motif in the American mythology. “Neon is the symbol of the American way of life,” says Collard. “They say if you turn off all the neon in Vegas, it will look like a Longueil parking lot in the middle of the night.”

The 1980s saw a neon revival that Collard calls, the “Miami Vice and 80s cocaine-disco-neon.” With the invention of LED lights, which were cheaper and more easy to maintain though, neon faded into the 1990s. “LED is like the cheap Chinese Christmas lights but easier, cheaper and they consume less electricity.”

Maybe 5 or 10 years ago neon started making a comeback in New York. “People take old signs and repair them, like Budweiser signs, to put in their Williamsburg lofts.” Collard believes this is in part due to the better quality of neon, but also a hunger for “an American way of life that is gone.”

While traditionally neon has been a kind of outdoor sign, they are difficult to maintain against the elements. “It’s like the Farine Five Roses sign,” he explains. “It’s always broken somewhere because outside the birds go in there, rain gets in and the snow damages it.”

Most clients now look for signage inside, a shift in understanding branding and art. Now neon is not just an advertisement for businesses, it is a work of design, a light source and in some cases a landmark, such as the design for an enormous 7 foot-wingspan bird, which hangs at the Tiradito restaurant on Bleury.

Neon has a quality of iconography few arts have. The famous 40 foot cowboy that first inspired Collard, has recently be featured as a part of the totem for American mythology in the new series American Gods. Shows like Glow on Netflix and Moonbeam City with Rob Lowe use neon to feed nostalgia hungry audiences. We seem to be in a new era of neon, that Collard dubs a “retro revival,” especially inspired by the 1980s.

You don’t have to look to America though to see the power of neon. Like most major cities, much of Montreal’s neon has been stripped down but a few icons remain. Collard points to some pieces on Villeray that remain intact but stands by the iconic Farine Five Roses as the best. “I love it! I did a lot of art with it. Everybody has stories about it, coming back to Montreal you see it from the bridge. It represents childhood and coming home.”

This article is part of Issue 1: Illumination